Launched first in March 2008, the Maruti Suzuki Dzire was Maruti’s ideal entry level sedan. It is hard to be critical about a car which is value for money, good to drive and has a humungous boot which made it an instant success in the market. The Swift with a boot slapped on – that is what you would call the Maruti Swift Dzire.

India’s leading automaker, Maruti Suzuki India Limited launched the new version of Maruti Swift Dzire in 2012, which was the second generation of this best-selling saloon.

From the front, the Dzire can be distinguished from the Swift by the double layered perforated grille and a reworked front bumper which has a wider and more angular air dam. The all new platform gives the Swift Dzire more width, more height and a longer wheel base. This might mislead to the notion that the Dzire has been increased in size. In essence it is quite the opposite; the new Dzire is actually under the 4 m mark to avail all the cost benefits. Instead of a full size boot, it is now a notchback and looks better balanced. It is also lighter than before thanks to the chopped boot. For a sporty touch the boot lid gets a light integrated spoiler and new tail lamps that are smart looking as well. The boot space is 360 L which is 150 L less than the previous generation. To integrate the boot, the design of the B pillar was changed, making the rear doors bigger. 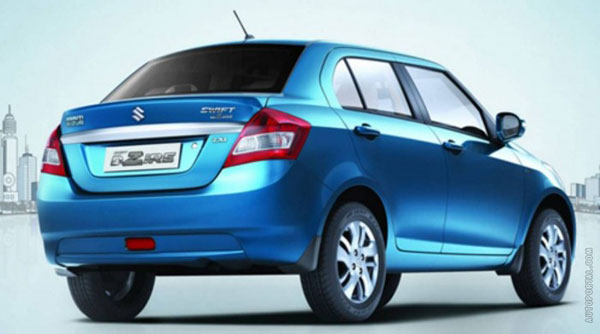 There is more useable space as compared to the hatchback and this is reflected both in the front seats as well as the back. The cabin layout is a sea change from the previous Dzire with the flowing multi-layered central console, wood finish inserts and touches of chrome, silver and leather. Like the Swift there are lots of cup holders and big spaces, and an integrated audio system. The cabin is more airy; the back of the front seats are scooped out and the rear seats are more inclined. The two tone beige-black colour adds class.

There are three trim levels and two engine options – the 1.2 l VVT petrol and the 1.3 l DDIS diesel. The 1.2 L is a four cylinder with sixteen valves with 87 bhp and 114 Nm of torque making it more powerful and more fuel efficient. The diesel variant is also with four cylinders and belts outs 75 bhp at 114 Nm of torque. Available is an automatic transmission which is targeted mostly at the urban market to make in city driving easier.The Dzire is accepted as a frontline contender in the compact sedan category in India.

Newly launched Crossover car in Indian Market, The Etios Cross from Toyota family with an attractive price tag above 5 lakh.