Menu
Home > Top 10 Luxury Cars > Which Lexus Cars Are the Best Looking of All Time?

Lexus has a long history of pushing forward in terms of the technology and design of its cars. Here are the best looking cars they’ve ever designed.

There aren’t too many hybrid cars that come with such a high standard of performance and style compared to the Lexus GS 450h. It uses the Lexus Hybrid Drive system. This means it has a 3.5-litre V6 petrol engine with an electric motor. The adaptive suspension makes the drive even more smooth and controlled. You can lease them from places like Inchcape Lexus at low prices too

It’s a car that’s also jam-packed with all the latest gear and technology. But it’s the design of the cars exterior that we’re really interested in. It’s an elegant design that isn’t overbearing. That doesn’t make it anonymous though. It’s subtly stylish in a grand and majestic kind of way!

Since first appearing at a car show in 2012, the Lexus LF-LC has really got people talking. It’s an exciting car, and it looks like one of the most incredible the manufacturer has ever produced. It’s expected to enter full production next year, but don’t expect it to be cheap when it finally does arrive!

They’re clearly going for the wow factor in terms of design. The sleek yet angular turns and curves of the body are like nothing ever seen before. It’s the kind of car that will compete with the likes of the best cars from Maserati and Lamborghini. It’s also thought that the LF-LC will be a hybrid.

It’s generally thought that the arrival of the RCF signalled the direct replacement of the IS-F. It’s a low to the ground roadster with a great sense of style. The first thing you notice when you look at the car is the huge grille on the front. It’s pretty impressive and give the car a fierce appearance.

The best part of the car’s design can be found in the interiors. The seats use great red leather, and the overall finish of the interior is superb all over. You won’t be thinking about that too much when you’re behind the wheel putting the most powerful engine Lexus has ever put into a car through its paces. 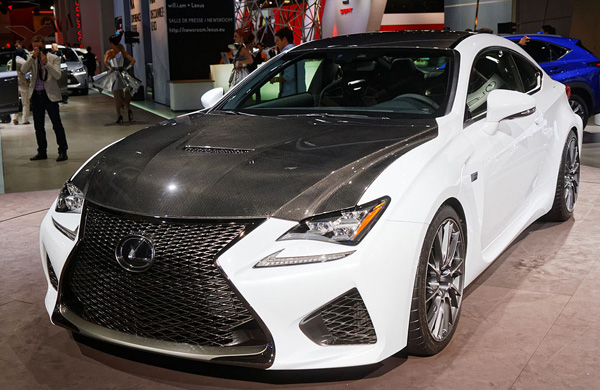 This incredible car only appeared for the first time last year, and it’s not available to buy just let. But anyone who has seen has probably already fell in love with it. It also gives us a glimpse of what Lexus are looking to do with their productions going forward. It’s a roofless car, and the one we’ve seen was painted gold.

There’s no guarantee that it will be on the market anytime soon, but we certainly hope it does. It’s one of those cars that once you’ve seen up close, you’re desperate to get behind the wheel and it the road. If this is what the future of Lexus looks like, it looks even better than the past.

Lexus seem to know how to design stylish cars better than any other manufacturer out there, these cars prove that.