SEAT has struck a deal with Amazon to be the ‘first car brand in Europe’ to integrate Amazon’s Alexa voice service into its vehicles. 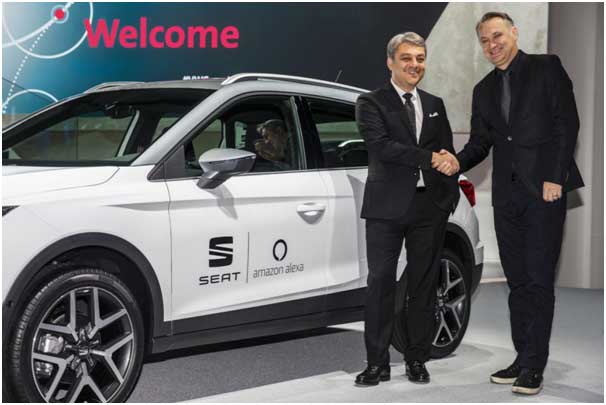 Amazon’s ‘personal assistant’, Alexa, could be making an appearance in your car.

The announcement was made by the president of Seat, Luca de Meo, at the Frankfurt Motor Show.

In 2018, Alexa will be made available in the Seat eon and Ateca models, the Ibiza, Arona and its new large SUV.

Amazon Alexa, which uses AI (Artificial Intelligence) to respond to a range of instructions and perform functions, will enable Seat drivers to use the voice commands to optimise their driving experience.

De Meo said, ‘Integrating Amazon Alexa in our range represents a great boost to Seat’s digital ecosystem and connectivity and certainly to position the brand as a front-runner in connected vehicles in Europe.

‘The trend in voice-activated services is growing and for this reason we want to make it available to our customers.’

We think voice is a big part of the future and this is particularly true in cars. With just a tap of the steering wheel, SEAT customers will be able to ask Alexa for music, get the news, control their smart home and much more.

Many other rival manufacturers and brand in the Volkswagen group are expected to follow along the lines of Seat.

Seat President, Luca de Meo said that ‘The trend in voice-activated services is growing and for this reason we want to make it available to our customers.’

Michael Armstrong, Sales Manager at VanStop has a strong belief that this car will be massively successful and it will influence the used car market after the release, setting customer standards to an all-time high, making salespeople jobs more difficult.

Seat says that at launch, Amazon Alexa will allow drivers to optimise their time in their car, find songs, points of interest and real time news and manage their schedules. At this stage, customers will only be able to control their Alexa system in English or German.