Hyundai Elantra and Honda Civic are almost on the same page in this regard; but Civic has a little advantage over Elantra, with an EPA-estimated fuel economy of 28 mpg city & 39 mpg highway.

Fuel Efficiency is one of the significant things that we check in a car. We prefer vehicles which does not consume much fuel.  Elantra’s economy rating for city is 27 mpg while for highway, it is 37 mpg only.

Hyundai Elantra GT is cozy, stretchable and more comfortable than Honda Civic. It offers an ample leg and head-room. Elantra is a taller driver’s choice because of its great cabin and roomy seat for them. 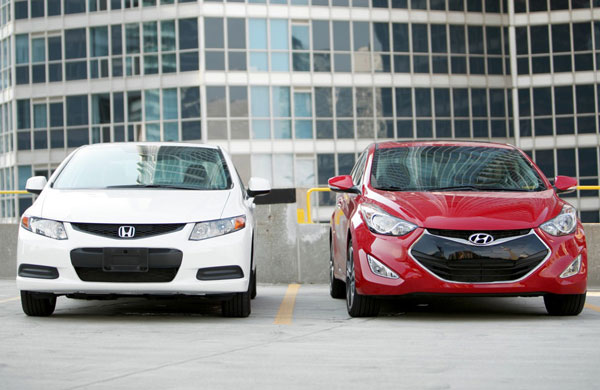 Honda Civic is a more regular, conventional & contemporary sedan while Elantra has differs in appeal. It looks like a modern, unconventional versatile hatchback (based on the Elantra Sedan’s outlook)
(Hence, there is a choice; either picks a Civic Sedan or an Elantra Hatchback)

And keep in mind that Honda Civic is bigger size-wise, while Elantra is compact. So, if you want a car which is easy-to-park than Elantra is the right car; but if a larger sedan appeals you than Civic is the best choice.

Riding a Civic is a different experience than riding Elantra. The latter impresses since, it passes smoothly over bumps or roads. It is not an issue to move it over potholes or broken pavements even. But Civic is its opposite.
(Though it does not respond harshly but still it is not as smooth as Elantra.).

If driving a Civic is gives you an impression of driving a nice, plush auto, Elantra gives a nicer, plusher impression.

After comparing two vehicles: Civic VS Elantra, we came to know that the Elantra’s suspension is way better than Civics’. The latter could not impress test driver’s at this point while Elantra left a mark on most of the driver’s mind because of its “smooth” suspension.

Honda Civic’s transmission either in manual or automatic is flawless. But Elantra’s transmission is somehow, cheesy or sluggish. In a performance test, with an automatic transmission, it accelerated from zero to sixty in 9.5 seconds. ( it was a slow response).

Spaciousness is also an important key point to ponder over, and in case of Civic & Elantra; the canny Elantra becomes a better option with lots of cargo storage & baggage room. So for family carrying a lot of luggage, Elantra should be a preference.

Although having similar the Destination Charge, Honda Civic & Hyundai Elantra have a little difference in their Manufacturer’s Suggested Retail Price (MSRP), Honda Civic is pricier with MSRP $ 17,965 to  $ 27,965 while Elantra is just $ 18,545.