Worthersee event takes place year by year, it is one of the greatest vehicle-based event in which hundreds of cars participate keenly. Audi also takes part every year, making sure it left some real marks behind.
This year same thing happened when Audi made everyone gape out there with its brand new model “Audi TT Ultra Quattro.”

The German automobile company came up with the latest “Home of quattro” in the form of this sports car. They have pushed back the idea of upbringing heavy-weighted, slower cars as it is outdated now.
The thinner but faster, TT ultra Quattro concept resembles that of human beings as in humans, the smarter is the faster indeed. 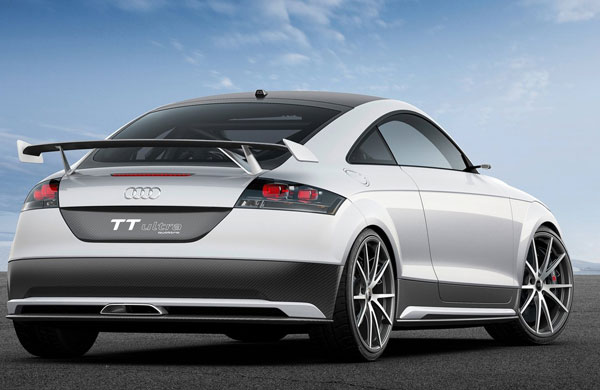 Audi TT is designed simple by keeping this rule in mind to use right things in right places. Though it looks like one of  straightforward concept cars but, in reality, there is not as easy as it looks like. It has skinned down now by shedding 300kg. Externally, its engineers have cut off 100 kg alone. With CFRP used in the rear side, in B-pillars, roof and middle, while magnesium is added in the hinge and floor.

Fiberglass reinforcement plastic (FRP) is used for R8 GT-sourced seats. It has helped shedding its weight for 22 kg; moreover, its new aluminum wheels have cut 20 kg.

It is an all-wheel drive which receives a latest engine of 2.0 four-cylinder which is turbo-charged. It produces 306 horsepower.

Audi is 1.3 seconds faster its regular model. It accelerates from 0 to 100 km/h in just 4.2 sec, and goes up to 280 km/h. its EPA fuel economy in both models is 22 mpg city/31 mpg highway which is totally reasonable. It consists of traction, hill-hold assist, front-sided airbags, stability control plus front knee airbags etc. its frond side airbags are designed to protect apex and chest.

Audi new is powerful when it comes to usage. It is fun for all types of tours. Its standard-shift paddles and drive system enhances the entertainment it has.

The 2013 Audi is skillfully plus tastefully created. It has all the top-notch material used, its seats are homey however, it rear seats are a bit tricky. These become spacious (up to 13 cubic foot) when folded.
All controls are easy-to-handle albeit the navigation system.

Anyways, the convertible latest has no match to its potent rivals like Porsche Cayman, Boxster and even BMW Z4 if we talk about conduct or driving dynamics. Albeit it is an improved version of its older cousins.

Story in the nutshell is new Audi TT is focusing more on performance credentials than on weight, it has reduced as much weight as it could. To make it happen, it has used a lot of magnesium, carbon fiber and titanium chunks which explains its usage for work and vacation both.