“IT IS CALLED THE WORLD’S FASTEST FOUR-SEAT CONVERTIBLE BY VIRTUE OF ITS TOP SPEED: 202 MPH.”
If you ask me which car is the speediest among entire Bentley realm? I will retort, “2013 Bentley Continental GT Speed”. Yes, it is even faster than the world renowned $ 225,440 Lamborghini Gallardo (top speed 202 mph).

Dive deeper and get to know that a twin-turbo 6.0 W12 engine is backing it and makes it possible for GT Speed to churn out 616 horsepower with torque of 590 pound-feet. The standard Continental GT had a difference of 49 hp plus 74 lb-ft.
According to Bentley, it sprints from zero to sixty in 4 seconds which makes it a better option than the rival 2013 Maserati Gran Turismo Sport, which accelerates in 4.9 seconds and Mercedes-Benz CL65 AMG that goes from 0 to 60 in 4.2 seconds. Bentley Continental tops out at 205 mph. 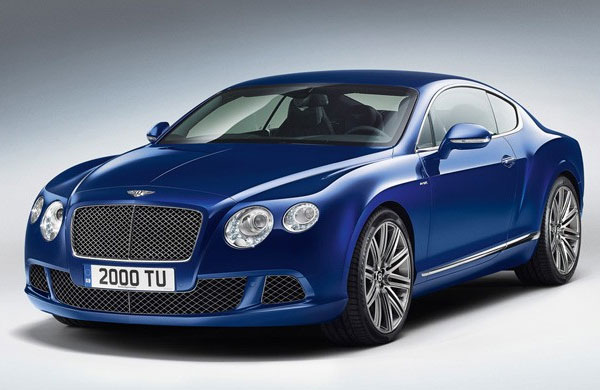 And because of the eight-speed automatic transmission, its fuel economy has amended by 12 percent. The suspension and steering are also upgraded which indicates that Speed is moving rapidly towards perfection.

Externally, it is sleek and modish with all the superlative materials used, out and inside. Major features to bait buyers include Mulliner Driving Specifications, swashbuckling wheel options, alloy pedals that are drilled, quarter panels for back and front doors, knotted shifter, quilted leather upholstery and many more.

2013 Bentley Continental GT Speed is a four-seat convertible/coupe with an astonishing curb weight of 5,500 pounds; however its width is 76.5-inch and height 54.9-inch. Its cargo area measures 9.18 cubic feet which is quite reasonable.
The convertible version of Bentley is especial since it owns an outclass top. For whom the Autoblog ‘s analyst comments,

“It has the Bentley of tops: fabric, seven layers, massively engineered, looks gorgeous up or down, takes 25 seconds to stow.”

It equals the Lamborghini’s Gallardo convertible’s top in stolidity and rigidity. And under the head-rests there are neck warmers provided for you with an autonomous climate control system.

Thanks to its W12 twin turbo that makes it possible to rock with a mind-boggling horsepower and torque (616 hp and 590 lb-ft, if you remember) and excel others with a pompous speed of 202 mph.

The mesmerizing ZF eight-speed transmission also work wonders by “blocking” downshift up to 4 gears simultaneously. It enjoys a pluckier suspension this time along with revamped reflexes.

Its inner view is incredible as there is all aluminum trimming used with Mulliner Driving Specifications. These two things have made the coupe worth-watching.

Link its speed with the closest rivals and see the results by yourself: Maserati Gran Turismo‘s top speed is 188 mph; while 186 mph is the top speed of Mercedes-Benz CL65 AMG and Chevrolet Corvette ZR1 top speed remains 96 mph.
So, speed-lovers, what else do you need?