Menu
Home > Autos Guide > We Drove A Renault Twizy For A Week. Here’s Why We Love It!

There are all kinds of intriguing vehicles on the market today. One such example happens to be the Renault Twizy. It’s not what you would consider a conventional car. In fact, it takes the word “automobile” to a whole new level!

At first glance, you might think this isn’t a vehicle that most people would want to buy. The thing is; once you take out for a test drive, it will grow on you. And then you’ll want to throw lots of cash at your nearest dealer to buy one!

So, what is it about the Renault Twizy that makes it such a sought-after model? We spent a week with one. Here’s why we love the little Twizy:

One of the main selling points of the cute little Renault Twizy is that it’s 100% electric. You don’t have to worry about carbon emissions or oil changes with this vehicle. The only thing you need to do is charge it up when the battery is running low.

There’s no denying the Renault Twizy is a car suitable for city use. Let’s face it; most of the time you’ll spend stuck in traffic when you’re driving in a city centre. You’ll waste an awful lot of fuel sitting around with an idling engine. With the Twizy, it runs on battery power. So, when you’re just sitting around, there is nothing to idle. And no power gets used!

Unlike many other electric vehicles, the Twizy doesn’t take all day to charge. Did you know it only takes 3.5 hours to charge from a domestic electrical socket? It also offers a range of 56 miles in urban environments.

So, if you work about 5 miles away from home, one charge will last you a whole week! Of course, you could always charge your Twizy at work and not have to pay for any electricity costs at home!

When I test-drove the Twizy from Autoworld-UK, I was sceptical about the range claim. I tried out that same five-mile commute example I mentioned earlier and I can confirm it’s all true. It does indeed offer that same electric range!

The Renault Twizy isn’t the biggest vehicle you can buy these days. But, like Doctor Who’s TARDIS, it’s bigger inside than it appears from the outside!

The boot space, for example, offers a generous 180 litres of storage. So, you could use this car for small local deliveries instead of a motorbike. 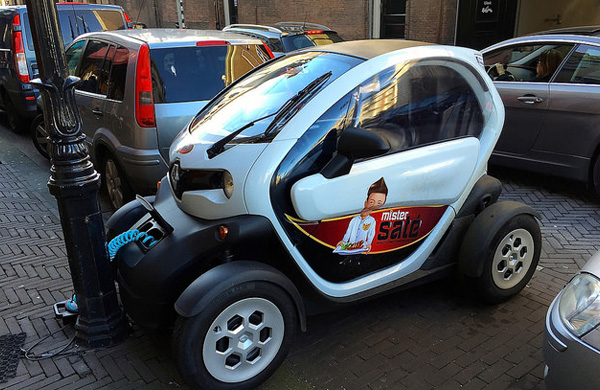 Parking is a dream in the Renault Twizy

One thing I hate about driving a car is finding a space big enough to park it in. My friend used to make me green with envy in his Smart Car. He could park it in the most ridiculously smallest of spaces!

In comparison, the Renault Twizy is smaller. I often see people parking their Twizy at a 90-degree angle to other vehicles. That also makes it quick and easy to drive off in any direction!

It’s a brilliant way to promote your business

If you’re an entrepreneur, you will love how the Twizy offers you a new marketing platform! It’s such a distinctive vehicle that people will recognise it anywhere. It also looks different to other cars on the road.

So, if you wanted to make your brand stand out from the crowd, advertise it on a Twizy!

It’s basic but not short on features

The only downside to the Renault Twizy, at least to some people, is how basic it is. For a start, there’s no in-car entertainment. It is possible, however, to have an optional Parrot Bluetooth module installed.

Renault says there’s no stereo because it’s only designed for short journeys. It does come with some cool features as standard, such as an automatic parking brake. It activates when the electric motor gets turned off.

There’s also an onboard computer and a heated windscreen. The latter being an option on most other cars! Other features include a lockable steering column and a driver’s airbag.

It comes in a range of different colours

When you buy a Renault Twizy, you can specify all kinds of two-tone colour combinations. It’s obvious this is a car for those that want a chic yet futuristic vehicle to drive. Renault is no stranger to designing futuristic cars that people can own today. The Twizy is one of them!

Last, but not least, the good news is the Renault Twizy is big enough for two adults! So, whether you wish to drive solo or go somewhere with a friend. The choice is yours!