Toyota Fuel Call vehicle is to be launched in 2015 yet the company has provided some of the specifications of the model. The car can accelerate from 0-100 km/h in approximately 10 seconds. It can travel roughly 300 miles about 482 km with a single fill up. No electric car can even come close to it. The tanks of the vehicle would be able to refill in 3-5 minutes. 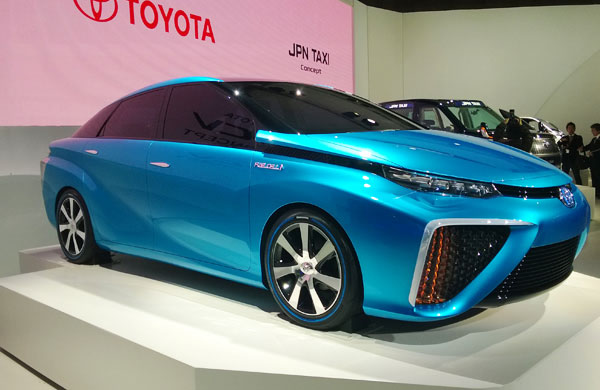 Fuel cell car are basically electric cars that makes use of fuel cells which means they can produce its own electricity, instead of battery stored electricity. The procedure is that the oxygen and hydrogen present in air will produce the electricity which is required to spin the vehicle’s electric drive motor. This concept is not new and people have been working on this concept for more than 20 years but there have been hurdles due to lack of costs and infrastructure available.

Toyota was successful in making a Fuel Cell Hybrid Vehicle back in 2007 and even then it was able to cover 300 miles on a tankful of compressed hydrogen. So even after so many years what is the development in this technology? In 2007, the car costs millions of dollars to produce and now there have been a dramatic reduction in cost as well as packaging.

It has been reported that this innovative car can also be used as generator to power lights and appliances in an average home. It has been said that in case of an emergency, the fuel cell car can be mated to an external device and the hydrogen FCV would be able to charge the home for about a week. There has been an experimental test observed in German port city of Hamburg. This was also demonstrated at the Consumer Electronics Show (CES) in Las Vegas.

Free Fill-ups By Toyota Once the Car is Released

At Washington D.C., there is no established cost for a kilogram of hydrogen but few years ago it was $8 per kg. This would roughly make 13 cents per mile which is more than an electric vehicle. However, Toyota has planned to provide free hydrogen fill-ups as a part of the purchase or lease plan once the car is released.

According to Jana Hartline, an Environmental Communications Manager, Toyota sees fuel as “our future technology for the next hundred years.” This would surely be an example for the futuristic cars, the fuel cell sedan 2015.