Recently Tata Motors opened a new engineering center in Troy, Michigan and at the opening ceremony Tata made an announcement about their upcoming small electric van Tata eMO-C. the new center is led by the President of Tata’s vehicle program Kevin Fisher. On the basis of the concept that is unveiled by Tata looks amazingly great and the manufacturer it is very exciting and hopeful for the success of the concept. Tata doesn’t share anything about the production of this van however, it is expected that the engineers of the Tata will soon start work on the concept. 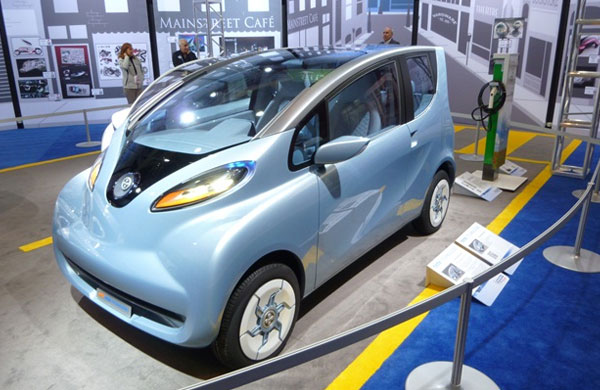 For the first time, Tata presented the concept of their new electric van at 2012 Detroit show. The manufacturer claimed that the car will meet all the global standards of environmental friendly and technologically advanced features. The car will be launched to the North American market and will be equipped will all the safety measures according to North American safety standards.

According to the President of Tata’s vehicle program Kevin Fisher “We studied the global commercial market, analyze the competition and emerging technology trends, and evolved the eMO to produce a compelling, best-in-class commercial concept.” The van will be offered at a price range from $15,750 to $23,750. In this price range it can be one of the best alternatives to those EVs that come with a hefty price tag of $40,000 like Nissan Leaf and Chevrolet Volt. The most important thing about the Tata eMO-C electric van is that it is just an engineering plan and it is not clear that when Tata put the car in production as well as it is also important to consider that Tata may include certain changes to the plan for extra benefits and to meet latest standards of the market. Kevin Fisher hired 60 skilled and highly qualified engineers for the eMO-C electric van and it is expected that by the end of the year the figure will grow to 100. The engineers in the engineering team are from India, Europe and North America and are collaborated to create a master piece.

The Tata eMO-C electric van concept is basically a small commercial van that is a smart choice of Pizza delivery or Postal/ courier services. The van will come with three battery choices with a driving range of 50 miles, 100 miles and 150 miles. The van will be the most affordable commercial electric van in the market. For example if we divide the price on the mileage, the 1.6 Km or 1 mile cost you less than 2 cents. Tata expects that the new concept is a good idea to launch this car to the North American market however, in North America the trend of using the small commercial van is not so common whereas in Europe the commercial vans are highly in vogue. Saying anything about the interior and exterior of the van, technology features, handling, control and performance are something belated and so we can just hope for the best.