The 2014 Soul is a new redesigned model with an original soul look, a floating roof and wrap around appearance  for the windshield and side window glass. The interior and exterior are also too much wider and improved with upgrade amenities and advanced technology. The chassis of the new 2014 soul is about 28% wider and stiffer than before. It has the mouth fish lower air dam and optional fog lights at the edges with a familiar lugaged grill atop. The new LED head light has been installed in the new seal with the smooth front end with broader borders. 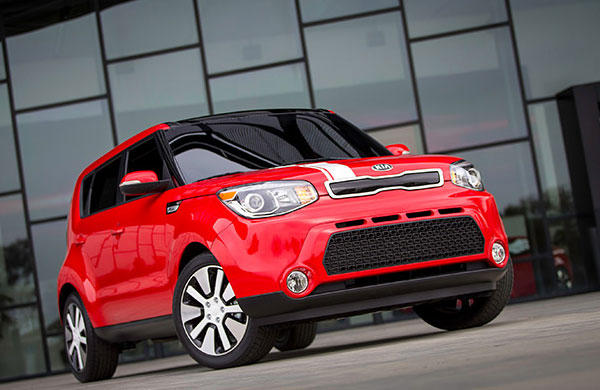 It will offer three trim levels i.e. base, exclaim and plus at the time on its first sale in the coming fall. The base has an engine transmission that has a direct-inject of 1.6 liter four-cylinder making 130 HP and 118 lb-ft of torque. The Exclaim and plus model uses 2.0 liter four-cylinder which makes 164 horsepower and 151 pound feet of torque both of the engines are especially tuned for improved torque. The 2.0 liter nearly delivers 10% more grunt from 1,500 rmp.

Base and Plus models

Base and plus models are available in the automatic and manual transmission while the exclaim model is only coming with an automatic transmission option. Ride quality of the soul is improved with the upgraded suspensions which benefits from the new bushings and Retuned shocks. An upgraded interior has been designed for the soul 2014 with a wider front legroom and overall headroom. It also haves a half cubic foot of the cargo facility with a 2.4 inch wider rear hatch opening. There is a new designed 8 inch touch screen from the centerpiece of the instrument panel which is used to control the UVO smart phone-Integrated system and the optional navigation or infotainment function and it also proved to control the Pandora streaming radio.

Other Awesome Features of Kia Soul 2014

Additional Option for Soul Exlaim and Plus Models

There is an additional option available for Soul plus and Exlaim models to include a panoramic glass sunroof, ambient cabin lighting, navigation system and a premium audio system. The soul plays and Exlaim models also include the UVO Eservice technology. The UVO eservice technology is paired with the Smartphone and when the soul’s air bags deploy The emergency services operator sends a signal directly to the soul’s location to speed assistance to the vehicle’s occupants. The owner of the car can also set the speed limit alerts and notifications when the vehicle is driven beyond the prescribed geographical boundaries through the UVO eService technology.

There is no official announcement about the price of the new 2014 KIA soul but the current car starts with $15,175 so it is expected that the new Kia will be in between 15 to 20 thousand US dollars Which is not a big money for a car like that.