Chevrolet acquires a 4-cylinder engine and its test drives showed that this hatchback is indeed very efficient with an EPA-estimated gas mileage of 25 mpg city & 35 mpg highway. Optional turbocharged four-cylinder engine work even better for it generates more torque. Manual transmission is standard in it while automatic is an option. And both the transmissions are thumbs up plus swift and serene gears. Although having an extra-light steering wheel, the handling remains dauntless. Sonic also has a green light for safety & security. 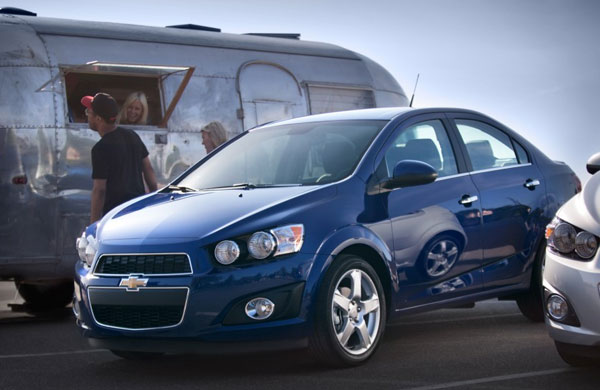 Chevy Sonic has surprised the test drivers with its amazingly ample cargo plus passenger’s space. According to the reports, both front and rear seats are cozy and unobstructed, increasing the motor’s comfort level. Now the bad point is, Sonic’s cabin is not well-laden and whatsoever, features provided are made from cheaper material. But for some critics it does not matter as quoted here:-

“The Sonic’s looks, features, performance and price make it a winner in spite of the interior’s unappealing materials.” —

It is a small drawback in it as other hatchbacks offer more features with an A-grade quality. There is no navigation system inside; while Satellite radio and USB interface is not included in standard features. However, there are a few standard tech features available. Moreover, its controls are simple to use and easy to understand.

2013 Chevy Sonic is subcompact automobile which offers two basic body styles. There are three main trim levels: LS, LT and LTZ and these trims levels are available in both the body styles i.e. sedan/saloon and hatchback. (While Hatchback has an addition trim also called RS).

2013 model is upgraded and now its standard features are a Bluetooth and blind-spot mirrors. Chevrolet’s MyLink infotainment is optional which gives Smartphone-compatible services, a navigation system, Bluetooth streaming audio and a touch-screen.

1.8 Liter four-cylinder engine is standard in Sonic which generates 138 hp and torque of 125 lb-ft, its standard transmission is five-speed manual that involves a hill-holder feature too; while six-speed automatic transmission is an option. And as mentioned before, EPA-estimated fuel economy is 25/35 mpg city/highway and 28 mpg is the combined economy. This is an acceptable economy for a car of its like. 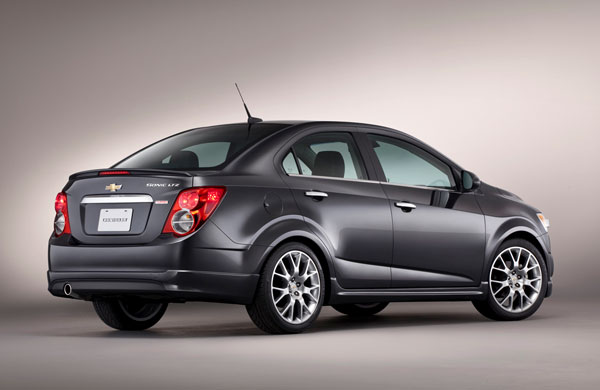 LTZ hatchback is the swiftest car among all Sonic models. In terms of safety, LTZ turbocharged ceased from 60 mph on 123 ft.  It is just a normal distance.

Also a top score in the “Insurance Institute for Highway Safety’s” in:-

Despite having an average interior, Sonic excels in performance and efficiency which is making it one of the best pick of 2013.